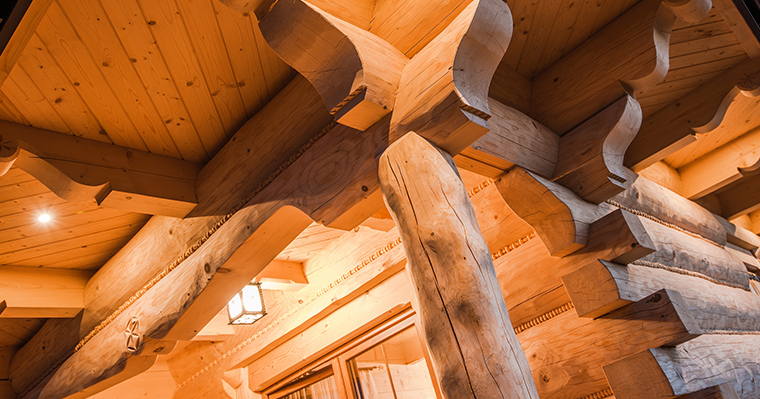 Anyone who knows me knows my love of the outdoors: fishing, camping, walking in the woods, or just sitting around a fire pit. A vital part of my DNA is also spending time with my family. God placed those desires in me, and I am so thankful I have been blessed to enjoy many, many days and nights doing those things.

The dream I had in May is close to my heart, and I share it now with what limited information I was given after waking and praying on its meaning. I am sure it will reveal more as time goes by and will share as it comes. For now, my prayer is that it brings you hope.

I dreamed I was in a magnificent log cabin on top of a high rugged mountain range. The cabin had beautiful dark mahogany veins along with the most gorgeous caramel and gold accents. Each color blended into the other as if the builder glued and spun them on a woodturner, yet I knew they were not grown anywhere here on earth. The cabin was not so large as to make you feel you were in a museum; it was just the right size with high ceilings and colorful throw rugs on the floor. The furniture was not a focal point but was darker and in the shadows.

Now, the mountains were like none I have ever seen in person. They were black, like coal, with very jagged edges sticking out everywhere. The tops were very pointed, but you could clearly look at the crevices because they were sprinkled with snow. It would remind you of the beginning of the stone giants battle scene in The Hobbit. The frame opens with the black mountain pass on the left where the company of Thorin Oakenshield is ascending and shows the other side of the rugged snow-capped mountain range on the right. The camera continues peering around the jagged mountain pass and reveals the dark, black gulch between them as the stone giants begin to cast boulders in the epic ‘thunder battle.’

There were two men and two boys with me in the cabin. The men were scurrying around getting equipment as if they were going camping. Throwing it together in a hurry and putting items in duffle bags. This all seemed odd since it was getting late, and the sun was about to go down. I wrote down in my journal, “darkness was coming.” The two boys were somewhat bewildered and wondering what the commotion was all about.

The dream continues, and I am standing at the front door of the cabin. It was open, and I step onto the porch. The porch stretched across the entire width of the cabin. The floor was made from caramel color wood, and the hewn double railing had knots that had been smoothed out. As I was standing there, the porch was cantilever on the side of the right mountain, and if you stepped off, you would fall thousands of feet to the river below. Thank goodness I am not scared of heights! I look across the ravine at the jagged ebony mountain to the left with snow then I return back inside the door.

It is twilight and almost dark. The front door was closed. The two men and I were standing at the entryway when they both said, “We have to go, NOW!” I yell back at them, “NO! We must wait for the morning before we leave!”

I went to the back of the cabin to the boys’ room, and they were scampering about when one said, “They are leaving and packing the Tacoma out back.” The two men had not come past me, so they went out the back somehow.

I looked out the window, it was now dark, and two trucks were facing the window of the boys’ room with their headlights on, and they were leaving in a hurry. I saw them speedily turn and drive off.

Next, I woke up on the magnificent front porch. As you walk out the doorway, I was on the right side in an exceedingly large four-poster log bed made of the same caramel color wood. I was under the fluffiest white down comforter I have ever seen. It would remind you of the fluffy white clouds that rise in the summer just before a storm. My head was to the west, toward the mountain on the other side of the gulch. My feet were pointed toward the east. I pulled the comforter off my head to peer out, and the brightest, most glorious sun began to break over the mountain top. The whole porch became a white-gold glow that was so warm and cozy. Total peace came over me.

To the right of me, on the other side of the door, was an elderly man and a woman. Both had beautiful silver and white hair and nicely dressed; the gentleman in a wool vest and the lady in her Sunday best. They were sitting in white rocking chairs, rocking back a forth. Once they saw I was awake, they turned to each other, smiled, grabbed each other’s hand, and stood. They walked toward me, beaming with joy, then turned, glided through the open doorway, and disappeared into the cabin.

I felt myself smiling as I looked up to the sun rays coming through what seemed to be evergreens just at the top of the mountain I was on. The golden spirals of heated light crested over the porch washing across my face, all the while bouncing its reflection off the white comforter. I then woke up.

Even now, as I read my words back to edit, it is hard to contain the tears of joy, peace, and comfort I feel. With each review, I am filled to overflow, knowing God is with us!

Here are four things revealed to me by the Spirit, verbatim, after I woke.

1 “Those who are unable to perform tasks the Lord needs to be done are being removed. What owner would keep a laborer that can not fulfill the task of the job?

2 “People are checking out and going home.

For days after having this dream I kept seeing mountain passes all over the place. The same day I had the cabin dream, I saw similar mountains on two separate memes from people I follow. I am still seeing mountains with a ravine in-between. I also had another glorious revealing in another dream noted below.

The Ram Over America

On May 13, 2020, I was shown a vision while sleeping. I saw the earth from the perspective of space. I was hovering right above the United States at nighttime. The sun was on the other side of the planet, and I could faintly see the rays peeking over the horizon. The North and South Continents were not really visible and were grayed out. However, I could see the United States’ full outline because of the lights shining so brightly across the cities, towns, and states. It was a glorious view. As I watched, it was as if the constellation of Aries, the Ram, manifested from the left. His grayish-white body ended at California, and his horns were over the New England states. It was a white, shadowy image, almost a three-dimensional ghost-like cloud. It floated from left to right and rested perfectly over the United States of America’s lights while the other constellations cover the world’s countries.

I saw mountains with a gorge in-between multiple times the rest of the day. I drew out what I was seeing, as you see below. That is why I was astonished that around the beginning of September 2020, the phrase ‘super V’ economy was used.

As The Lord Leads

In the coming days, more will be revealed, and I pray that the love and peace that passes all understanding will follow you, embed in your heart, and will give you comfort as we move forward in God’s Plan.